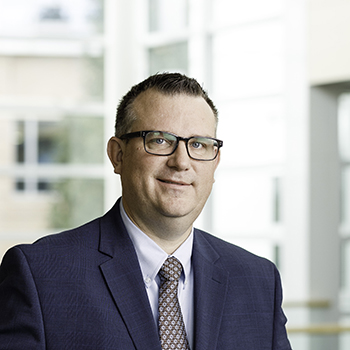 Brad joined Versiti in 2001, spending his first 15 years in Diagnostic Laboratories (DL), first as a senior development scientist in the Product Development (PD) Lab. Since then, he has held additional roles as director of the PD Lab; director, customer care and innovation; and vice president, DL operations. Over the years, Brad has provided key leadership, helping the laboratories tripled in size.

In addition to his leadership roles, Brad developed a formal process for evaluating, approving and prioritizing innovative technologies and clinical assays into Diagnostic Laboratories. He also led the early integration of clinical lab assets across Versiti into a single operation.

Brad trained as an undergraduate and graduate student at the University of Wisconsin in biochemistry, molecular biology and microbiology. Additionally, he earned an executive MBA from UW-Milwaukee, and is a certified Lean Six Sigma Black Belt. Brad grew up in central Wisconsin near Wausau. He currently resides in Menomonee Falls with his wife Dina, their son Charlie and daughter Lily. In his free time, Brad enjoys following the kids’ sports, golfing, supporting Badger athletics and improving his BBQ skills.

Versiti is a world-class blood health organization with locations across the Midwest. It facilitates blood donation, research and diagnostic testing.
Learn More

Versiti’s terms of use govern external visitors’ use of our website, mobile applications and all other proprietary Versiti software.
Learn More

Versiti offers a number of products and services for professional partners, including blood products for transfusion, specialty products and therapeutic services.
Read More
We use cookies on our website to give you the most relevant experience by remembering your preferences and repeat visits. By clicking ACCEPT, you consent to the use of all the cookies.