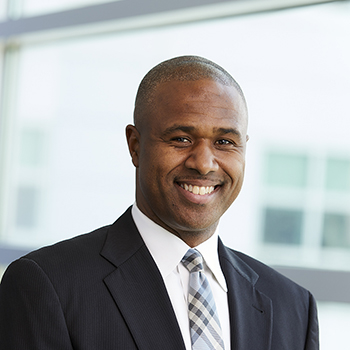 Chris became president and CEO of Versiti on Feb. 1, 2017, after a 20+ year career exclusively in healthcare. He is first and foremost a patient and donor advocate, while also passionate about the employee experience of 2,000+ Versiti colleagues across multiple states. Chris and his leadership team have built a One Versiti culture, stoked the flame of innovation both organically and inorganically, invested in infrastructure, established Ohio as a fifth Versiti state, and led the organization to surpass $380M in annual revenue.

Prior to joining Versiti, Chris served as group vice president and global immunology franchise head at Shire, helping to bring medicine to patients around the world and shaping the strategy for a $2.5 billion biopharmaceutical franchise. In his previous role at Baxalta, he was vice president of plasma strategy and new product development. Chris also worked for Baxter International as vice president of U.S. bioscience national accounts and spent 17 years with Eli Lilly and Company, most recently as general manager of their Australia and New Zealand operation.

Chris earned a Master of Business Administration from Harvard Business School in 2000 and a bachelor’s degree in accounting from Butler University in 1996. He was also a three-year starter on Butler’s basketball team and named an Academic All-American in 1995.

In June 2021, Chris joined the Butler University Board of Trustees. He was also appointed to the Board of Directors of Arthur J. Gallagher & Co. (NYSE: AJG) in March 2020, elected to the Medical College of Wisconsin Board in 2018, and is a member of the Executive Committee of the Board of Blood Centers of America.

Chris and his wife Nicole live in Whitefish Bay, WI, and stay busy with their three children Sage, Mace and Crew.

Versiti’s CEO Circle Award winners embody our core values and drive our mission of service. They lead and inspire, helping to build our culture and expand our life-saving expertise.

Versiti is a world-class blood health organization with locations across the Midwest. It facilitates blood donation, research and diagnostic testing.
Learn More

Versiti’s terms of use govern external visitors’ use of our website, mobile applications and all other proprietary Versiti software.
Learn More

Versiti offers a number of products and services for professional partners, including blood products for transfusion, specialty products and therapeutic services.
Read More

You can support Versiti’s mission in several ways, including donating blood, hosting a blood drive, joining the organ and tissue donor registry, and more.
Learn More
We use cookies on our website to give you the most relevant experience by remembering your preferences and repeat visits. By clicking ACCEPT, you consent to the use of all the cookies.