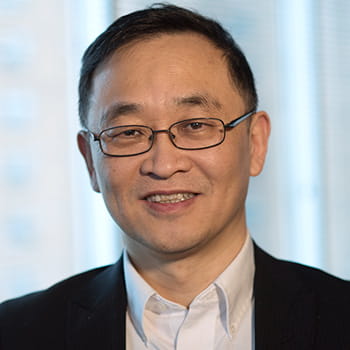 John B. and Judith A. Gardetto Chair for Cancer Research, Senior Investigator

During hematopoiesis, hematopoietic stem cells (HSCs) give rise to all blood cells, including erythroid, myeloid and lymphoid lineages. The self-renewal and hematopoietic differentiation of HSCs are strictly controlled by both extrinsic and intrinsic signals. B cells, a subtype of lymphoid cells, are critical to the immune defense, and their development and function are also highly regulated by signals derived from a variety of cell surface receptors. Abnormal signals from the receptors often lead to hematological and immunological diseases, including hematopoietic malignancies, and immunodeficiency and autoimmune diseases. Our research focuses on identifying and functionally characterizing signaling molecules that are important for HSC and B cell biology. Our research employs multiple cutting-edge approaches, including the targeted gene disruption, transgenic, and bone marrow transplantation technologies.

Upon binding of cytokines, cytokine receptors initiate signals to regulate a variety of cellular responses, including cell growth, survival, differentiation, and function during hematopoiesis. Engagement of cytokine receptors induces the activation of the JAK family of cytoplasmic protein tyrosine kinases. In turn, JAKs activate components of diverse signal transduction pathways, including members of the Signal Transducers and Activators of Transcription (Stat). The importance of the JAKs and Stats in signaling has been emphasized by gene disruption studies. Dysregulation of JAK/Stat pathway has been implicated in the pathogenesis of numerous hematological diseases. One of our current research projects studies the regulation and function of Stat5 proteins.

In addition, Gimap5 (GTPase of the Immune-Associated Protein 5) is a member of a novel family of guanosine nucleotide-binding proteins. Our recent studies discover that Gimap5 plays a critical role in the survival of HSCs and hematopoietic progenitor cells. Gimap5 enhances interaction between Mcl-1 and HSC70, thus preventing Mcl-1 degradation and maintaining mitochondrial integrity. One of our current research projects studies the molecular mechanism by which Gimap5 regulates the survival of HSCs as well as the role of Gimap5 in regulating leukemia stem cells.

B cells are one important component of the adaptive immune system. Signals from the B cell antigen receptor (BCR) and its surrogate predecessor pre-BCR are essential for the development, maintenance and function of B cells. Improper signals from pre-BCR/BCR often result in immunodeficiency, autoimmunity, and B-cell leukemia. During last decade, a wide variety of signaling molecules involved in BCR function have been discovered. Our current research projects aim to fully understand the pre-BCR/BCR signal transduction cascade by identifying novel signaling molecules of the pre-BCR/BCR. Our current research projects also study the molecular mechanism by which signaling molecules, such as phospholipase Cγ (PLCγ), Bcl10, MALT1 and TAK1, activate NF-κB during BCR signaling and investigate the roles of these signaling molecules in pre-BCR/BCR-mediated B cell development and function in vivo.

The long term goals of our research program aim to establish a thorough understanding of the normal signaling pathways of the cytokine and pre-BCR/BCR receptors, to obtain new clues regarding the molecular pathogenesis of numerous hematological and immunological diseases, including acute or chronic hematopoietic malignancies, and immunodeficiency (such as agammaglobulinemia and common variable immunodeficiency) and autoimmune (such as systemic lupus erythematosus, rheumatoid arthritis, type I diabetes, multiple sclerosis, hemolytic anemia, and heparin-induced thrombocytopenia) diseases, and to aid in the development of novel therapeutic strategies for treatment of these hematological and immunological disorders.

We study the development and function of the immune system and design immunomodulating therapies for infection, autoimmune disease, and cancer.
Learn More